A Gift for the Last Holiday Season Ever

Do you love the holidays? Do you love shopping for the last holiday season ever? Fantastic. Apocalypse Cakes: Recipes for the End, is the book for you. Including 30 recipes for treats such as BP Oil Black Bottom Cake, Toxic Waste Dump Cake, Global Warming Hot Apple Pie and other delights, this diabetic tomb is available on Amazon.com until we all drown in an epic sea of warm trash.

Get your copy here, now.

Martha Stewart approached Apocalypse Cakes worried that she was not doing enough to prepare for the End Times. She was so delighted with our doomsday prep suggestions that she published her new Spring Apocalypse Calendar in the April issue of MARTHA STEWART LIVING. Click the image (or here) to view her entire schedule. 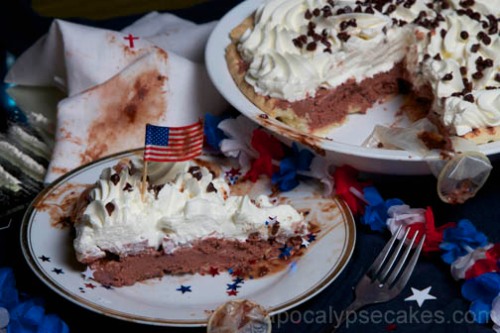 Directions
Cream together frothy egg yolks and sugar in a mixing bowl. Mix in cornstarch, cocoa powder, and salt. Add milk and stir gently. Pour mixture into a large saucepan and cook over medium heat, stirring constantly, until boiling. Remove from heat. Stir in butter or margarine and vanilla extract. Cool slightly, then pour mixture into pastry shell. Chill before serving. Garnish with whipped topping while your friends from Grindr get naked.

With the fat, rich captains of industry wiping their asses with your mortgage and private- jetting to St. Tropez as the country festers into a third world cesspool, you’re bound to die of starvation tomorrow. These richest 10 percent of Americans control two-thirds of America’s net worth, and that means you’ll waste away with cancer with no healthcare and only donated Lunchables to eat. On your deathbed, you’ll wish you had moved Iran, Nigeria or Turkey, where income inequality isn’t as big a problem. Best to try some Economic Collapse Crumb Cake today before the government throws you under the bus for some Cuban cigars and private golf club memberships.

Directions
Preheat oven to 350 degrees. Lightly grease a 7×11-inch baking pan. Combine sugar, flour and butter. Use a fork to cut butter in until mixture resembles coarse crumbs. Set aside 1/2 cup of this mixture to use as topping. To the remaining flour mixture, add cinnamon, cloves, baking soda and salt. Lightly stir in the buttermilk and egg. Pour batter into prepared pan. Sprinkle cake with reserved topping. Bake for 25 minutes or until a toothpick inserted into center of the cake comes out clean. Call your broker and tell her to have all your assets converted to cake.

Now that our godless politicians are letting the homosexuals have their “marriages,” our children’s eyes will burn out of their skulls, upstanding heterosexuals will start making love to their golden retrievers and the Earth will explode into pink globules of KY Jelly — all to the soundtrack of RENT. And with every semblance of civil society gone and the police debauched into actual, non-ironic leather daddies, you’ll want to barricade your homes to protect yourself from those crazy, married gay leatherfolk whose reason for living is to force you to form a holy union with your parrot. Start planning your Gay Wedding Cake today — you don’t have much time left before everyone’s allowed to have health insurance and the whole planet turns into that vortex of barbarism called Massachusetts. 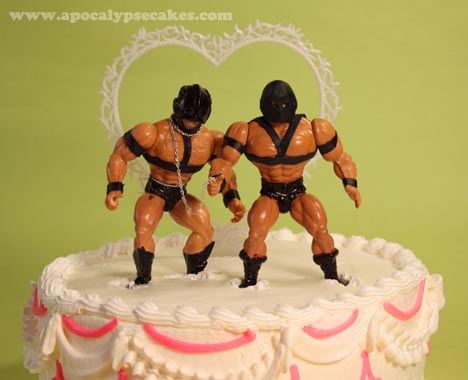 Directions
Go to a straight wedding. When everyone is drunk playing that sexy garter-belt game go steal the cake, being careful not to lose the little hetero-figures on the top. Bring the cake home and put some gay dolls on it — the more your dolls look like the people Focus on the Family are afraid of, the better — and ceremoniously remove the straight figurines from their rightful place. All the people who see your cake will shake their heads and wonder where the poor breeders went. Then they’ll think, “those wholesome man and wife dolls have been deprived of the life God intended for them.”

Get your town’s forecast. 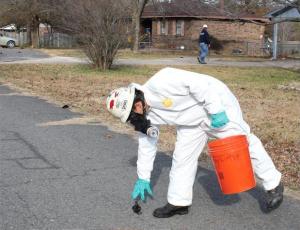 Hark! As foretold in the Book of Revelation, The Lord’s Aviary of Retribution has burst forth and festooned our cul-de-sacs with its decorative corpses. The dead birds are part of a menu of surf and turf — fish, crabs, blood, frogs, Craisins® — whose descent signals Jesus’ return for the battle of Armageddon. But we’ve ignored the scriptures, having instead whitewashed the avian holocaust’s prophetic message with scientific explanations. And for this infraction, the Almighty will command legions of righteous grackles to tear through your ceilings into your godless homes, splattering their diseased bird gore onto every inch of your Pottery Barn-ed, paganscaped estates. Best to gorge on some “Inexplicable” Blackbird Pie today before you suffocate under a festering pile of feathered carcasses. 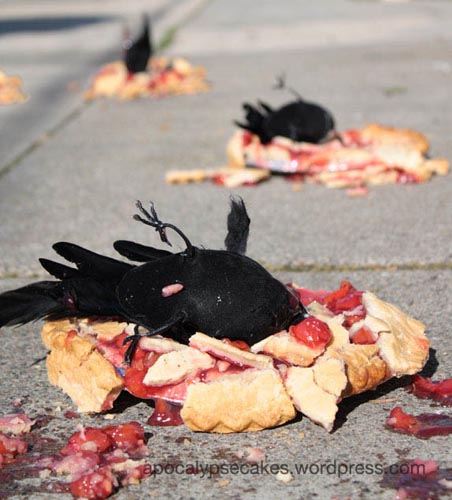 Directions
Drive to the suburbs with your pies and birds. Insert birds into pies. Drop pies from sky, creating a decorative splatter pattern for the neighbors to see. Invite everyone out for dessert.

What better way to celebrate the Engulfed Coast than by gorging on little cream puffs bursting with artery-clogging serum? There isn’t one, and this is why we’ve oozed into the filled-pastry arena by selecting “Butaneous Profiteeroles in Drilling Disaster Sauce” as the winner of the BP Oil Spill Cake Naming Contest. And we don’t care that a profiterole isn’t a cake because profiteroles more disgusting than cakes. Ms. Gigi Generaux of Las Vegas, NV submitted the winning entry.

The butaneous submission beat out other gross names such as “Smothered Turtle Pie with Dispersant Cream,” By Freddy Bowen of Philadelphia, PA, “Devil’s Crude Cake” by Shan Powell of Ontario, and over 80 others. Gigi will receive a free set of Apocalypse Cakes Recipe Cards and a chocolate endangered species mold as her prizes.

Will you name the BP oil gusher cake? S/he who comes up with the name of the Apocalypse Cakes oil gusher dessert will get a delicious specimen of endangered chocolate wildlife, Internet fame and a set of Apocalypse Cakes Recipe Cards. To enter, follow these two easy steps:

1. E-mail your oil gusher cake title, name and mailing address to apocalypsecakes@gmail.com. One entry per person.

2. Write “Oil Gusher Cake Contest” in the subject line of your e-mail.

The contest ends 11:59 p.m., Saturday, July 31st, 2010. The winner will be notified via e-mail and announced here at Apocalypse Cakes. Want to see the evil of our previous “Name the Swine Flu Cake” contest? Check out Sharif Youssef’s winning entry here.

With all the bathroom-buggering politicians crushing already starved countries with embargoes, military interventions and corrupt aid distributions, your nation is surely next to become so destitute that all you have to eat are cakes made of mud. Fortunately, we’ve developed a tastier version of this type of dessert for your pre-poverty palate. In fact, you’ll relish its flavor for as many years as it will take for anyone to notice that you’ve been eating dirt for decades. So celebrate life now and try one of these organic Seismic Haitian Mud Cakes before the “First World” uses its foreign policy to starve you in the name of democracy, privatization, SUVs and Viagra® — you never know how long it will take for a disaster to strike that will guilt the international community into finally bringing you a meal. 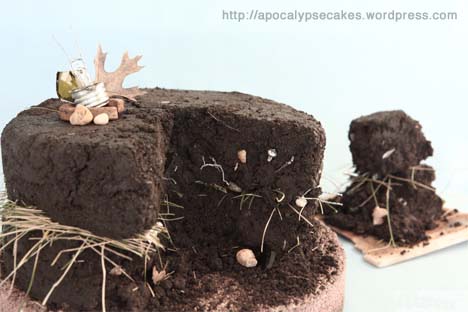 Directions
Put your dirt into a strainer (or whatever’s available) and hold it over a pot. Then run water (or whatever’s available) through the strainer to extract the rocks, etc. Mix in the shortening and the salt. Then pat the mixture into a cake and leave it to dry under the scorching sun. The cake will be ready to eat after 12 hours, after which time you can decorate it with whatever happens to be around.